And no-one gives a rat’s ass.

There are a lot of things to get angry about – death by malaria carrying mosquitos, the Aids virus or the crazy new weather.  These are pretty much out of our hands or “Acts of God” if you’re a warped fundamentalist.  But there’s a new killer on the block – one entirely of our own making.  And we can do something about this one.

The shocking statistic above is brought to you courtesy of Monsanto, who are giving the Old Testament God a run for his money – they’ve notched up a death toll of over a quarter of a million farmers in the last sixteen years.

If you’re not familiar with capitalism, it goes like this.

Monsanto, purveyors of genetically modified seed, did a deal with the Indian government.  In exchange for being allowed to sell their Frankenstein seed creations to the Indian farmers, the Indian government received International Monetary Fund loans, hence allowing the huge economic expansion of the nineties.

Monsanto cosied up to the farmers in the manner of a drug dealer at the school date, extolling the virtues of the new seeds – better yields, parasite resistant, a golden egg laying goose at the end of the giant beanstalk.  I made up the last one but metaphorically speaking it still holds.

Given that the farmers were largely illiterate, this selling bonanza didn’t constitute a particularly hard day at the office for the Monsanto employees.

Once the seeds were planted the farmers discovered a few less wholesome side effects – reading the small print not being a speciality of theirs.  Or reading any print for that matter…

First of all the seeds were BARREN.  For centuries, farmers in India would plant crops, then save the seeds for replanting the following year.  With genetically modified seeds this isn’t possible – they have to go back to the dealer every year to buy new seeds.

This marketing technique works great when you’re dealing in say ink cartridges – sell a useless piece of crap Hewlett Packard printer for less than the cost of the box it came in, then charge an exorbitant amount for the ink cartridges.

But at least nobody is dying in Office Supplies.

Second – the farmers found that they had to buy tons of Monsanto pesticides to help the seeds grow.  This is like an After Sales Package that you find is compulsory but not included in the original price – again no problem in the cynical, suspicious Western world.  Most of us go looking for that kind of shit before buying anything.  Besides we have Google, Amazon reviews and Twitter to help us navigate the muddy waters of “salespeak”.

Not so the illiterate farmers.

Lastly, the farmers discovered that many of these seeds (in particular the cotton seed) needed excessive irrigation in order to thrive.  Remember this is India we’re talking about, not Seattle.  India is known for many things, but an abundance of water is not one of them.

The crops fail, loans are taken out – high risk so at exorbitant interest rates – debt and destitution follows.  In a fitting “fuck you” tribute to Monsanto, the preferred form of suicide is death by drinking Monsanto pesticides.

Over a quarter of a million deaths – the largest recorded suicide rate in history.

Meanwhile back in base camp, what’s going on with the friendly folk at Monsanto, who’ve been getting a bit of bad press lately.

First, by spending vast amounts of money, they have successfully fended off legislation that would require them to put “genetically modified” on food labels.  They said this would be “befuddling” to consumers.  But let’s not forget the $45m dollar campaign that helped them sway the vote (versus the $8m from the organic food companies).

Even if the jury’s out about the health consequences of eating GMOs, at least labeling would allow us to support the farmers by NOT BUYING stuff from a morally bankrupt corporation.

Second, Monsanto won’t allow independent research on the grounds that their seeds are patented.  Non-independent research isn’t worth the paper it’s printed on.  Remember the scene in Mad Men when the guys from Lucky Strike were ridiculing the evidence that cigarettes were harmful to health.  That wasn’t fiction.

Many of the ads in the sixties actually stated the health benefits of smoking.  Camel came out with an ad “More Doctors smoke Camels”.  They maintained to the bitter end, that cigarettes were non addictive by conducting their own research and skewing the results in their favour.

Lastly Monsanto have the funds to recruit a powerful team of lobbyists working on their behalf, to clean up their image.  One of them is a very vocal environmentalist – Mark Lynas – who once was anti GM but has now converted to the other side, presumably after some damascene moment whereby huge amounts of cash knocked him from his donkey.

In order to make this event more significant Mark has upped his status from “anti GM” to “Co-founder of the anti GM movement in the UK” – before his conversion that is.  Rather hilariously, Sue Mayer of Gene Watch refuted his credentials thus “I find it strange that though we spoke on the phone once in the late 90s and never met, that I missed the fact that you helped start the anti GM movement.”

I suspect that the going price for “turning” an environmentalist wouldn’t even make a dent in the petty cash tin of a corporation the size of Monsanto.

We need to insist on labeling so we can vote with our cash.  The rural poor in India don’t have that luxury.  In many places the only food they have access to is Genetically Modified.

There’s even a price on a rat’s ass. 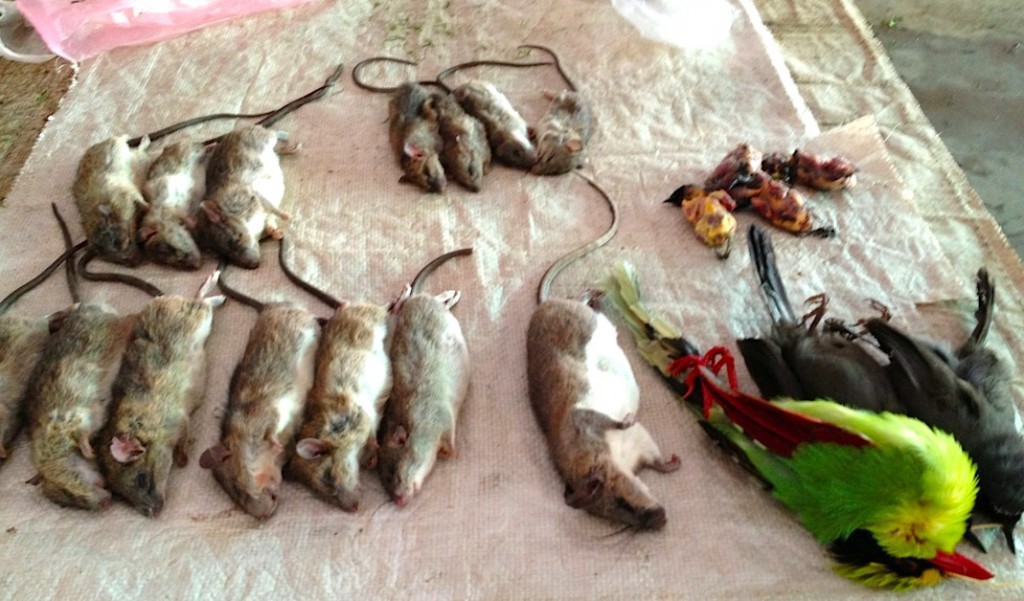 Posted on February 21, 2013 by Eleanor O'Rourke
Filed in General, 14 comments