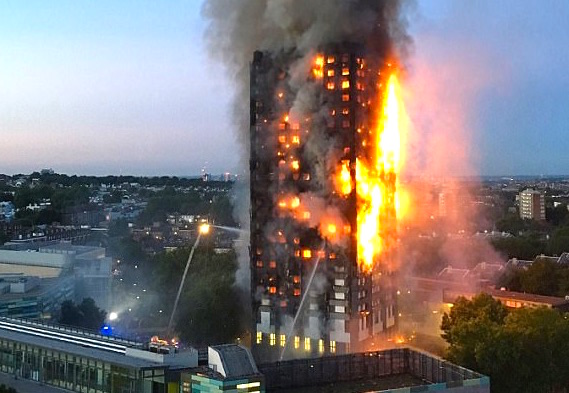 Someone once said to me, that people have an incredible propensity for solving the wrong problem really well. It makes sense. We like to feel competent and in control, so when faced with the unfamiliar or shocking we respond in the only way we know how… but we do it with great enthusiasm.

It’s not enough. Not any more. Things are more complicated now.

These two images neatly sum up the polarized London housing market. The middle ground is shrinking. People on a normal salary (teachers, nurses, office workers, drivers, firemen) can’t afford to buy homes in London. Some hold down two jobs to make ends meet, others add hours to their working day with long commutes on overcrowded trains. A few lucky people get onto the social housing list meaning cheap rent in central London… a game of chance that turned into Russian Roulette on the night of 14th June when Grenfell tower went up in smoke with everyone inside.

Meanwhile, thousands of properties in central London are empty… because they were never bought to be lived in. They were bought as a shrewd investment – to increase demand, to push housing prices up even higher, to be used as equity against further loans. They’re not homes they’re part of a hideous game of monopoly played by the super rich.

The burning of Grenfell tower was shocking, horrific, and almost medieval to witness. Children banging on windows screaming. A mother, realizing she was about to die, throws her baby from a 10th floor window, hoping that the child would survive while she herself was consigned to the flames. A building housing 120 families engulfed in fifteen minutes (because of the wrong kind of insulation) and burnt to a shell soon after.

The response from the local community, and beyond, was immediate. As is the case in all disasters the media is awash with stories of the kindness and generosity of strangers. This is the sort of event that unites humanity. We care. We want to show our love and support. An army of volunteers arrived. People gave food, clothes, blankets, water. Boxes piled up while more donations kept arriving. But who to distribute them to? Many of the inhabitants were dead or in hospital. The volunteers wandered aimless, wanting to do something, wanting to help.

Then the people got angry and took to the streets with chants, slogans and placards. They demanded the resignation of Theresa May and the jailing of people who worked for the council. They wanted to be re-housed in the terraced houses across the street – where the local community had lived in the good old days.

But Theresa May didn’t create the housing crisis – capitalism did. The council and the housing association didn’t set out to murder people, they’re trying to do an impossible task. They have limited resources. The need for those resources is huge, and terraced houses in Kensington now cost £3,000,000.

Each time there is a crisis we respond with two emotions – love and anger. We bring blankets and shake our fist. We’re passionate, empathic human beings. But love and anger need an upgrade if we’re going to make the change that’s required in the world today. Passion is great at lighting a fuse but it fizzles out quickly. Where is the Occupy movement? The 99%? Where are the women who marched against Trump?

Passion is like dating. It’s exciting, intense and wonderful. But it’s fairly self serving and impossible to sustain. Compassion is like a relationship. It’s more consistent, less heroic, less glamorous but ultimately it’s the only thing that creates real change – both for the people being served, and the people doing the serving.

How have real changes happened in the past? – the civil rights movement, the end of apartheid, the curtailment of the aids epidemic?

“And they say that a hero will save us…”

We’ve been indoctrinated by the narrative of the lone hero… the John Wayne archetype. The strong male, charismatic figure who takes no shit and single handedly saves the day, while looking cool and glamorous. But this is a modern myth.

Most of the heroes of the civil rights movement are anonymous. They weren’t the very visible, vocal hippies of the love revolution (who were probably too stoned to be practical… or who went on to cut their hair and get jobs in advertising). The real heroes were just good people who went down and did a job and kept doing it until they changed public opinion. They created communities. They kept each other accountable and inspired each other on. They shared resources.

They didn’t get bored when things were going too slowly. They didn’t give up when no-one acknowledged their contribution.

They just saw a need and they got on with the job of filling that need.

The same goes for apartheid (Nelson Mandela didn’t do it on his own) and the Aids epidemic. These are the unsung heroes.

But we cling to our old, outdated archetypes. The lone hero has now become its own acronym – the SJW. Social Justice Warriors are out in force everywhere – mainly behind the glass wall of computer screens, posting selfies on Instagram, adding to their Pinterest wall of slogans, raising money on Kickstarter for their own particular brand of solution. There are over 160,000 registered charities in the UK alone, over 1.5million in the U.S. And this doesn’t include the local, non registered ones. You’d think some of these could get together and share resources, work towards a common aim, but no…

Everybody wants to rule the world.

I grew up in a working class community. And I once lived for a short time in a posh apartment! Meeting people in the lift was interesting. Many residents found it difficult to make eye contact. They would stare at their shoes, or take out their phone as if to read an important email. They looked nonchalant but their energy seemed to say “You are a human being. You have needs. You might want me to meet some of those needs. I will end up disappointing you. You will end up hating me. I must hide”.

But something needs to be done to bring together this tale of two cities. Or perhaps it’s now the tale of three cities – the rich, the poor, and the virtual (SJW). The answer has to lie in community. And if we’re going to build communities we need to become more brave.

Right now Theresa May is trying (and failing) to be lone hero brave. Solving the problem with her mind. It’s mental (in every sense of the word). She has a crazy, frightened look in her eyes. She has called for investigations, and pledged money to the victims. (This one always makes me groan — “Your husband died, here’s £50,000. Are we all good now?”)

It would be more helpful if she could actually look people in the eyes and say something along the lines of… “This sucks. This was a monumental fuck up. I’m sorry. Please forgive me. Let’s put our egos aside and work this out together — Labour. Tory. Rich. Poor. Let’s start to build communities again.”

So much criticism is directed at ethnic minorities for not integrating into society, but what about super rich minorities – they haven’t even attempted to integrate into the societies they live in! They live in luxury ghettos, barricaded against the needs of others.

Except one day of course they’ll realize that fear lives inside. And its only antidote, is love. Not sentimental love or romantic love, or needy love…

The kind that takes no prisoners.

Posted on June 18, 2017 by Eleanor O'Rourke
Filed in Consciousness, Rants, one comment