We are storytelling creatures.  We love stories.  They create context.  They help us attribute meaning to our life.  When we describe a sequence of events through a story we can turn the mundane into the remarkable, (serendipity), the humiliating into the humourous, (comedy), the fear into courage, (action adventure).

Stories allow us to feel an emotional connection to an idea.  Successful companies are often founded on a good story, just as soldiers have marched into battle high on a compelling one. (Braveheart…Gladiator)

So how do we construct stories for the new paradigm?  We can’t ditch the old stories…they’re part of our DNA, but we do have to find a way to evolve them into something more appropriate for the times we live in.

Characters:
From a symbolic perspective the Knight represents the mind and the Damsel represents the emotions.  We love the Knight.  He’s full of action, focus, strength, heroism.  On the flipside, he’s not all that comfortable with his emotions, (perhaps one of the reasons he wears a metal breastplate over his heart), but that’s not a problem if he can project them onto the damsel.

The Damsel is less obviously attractive to us but is still a popular archetype.  The dark glamour of erotically charged wistfulness has a certain lure.  It can be passive to the aggressive Knight but it can often be manipulative (‘Not you!! I don’t want to be rescued by you.  I’ve written this rescue scene in my head countless times and I did not cast you in the lead role.  Now get out of here.  I’m trying to look helpless). 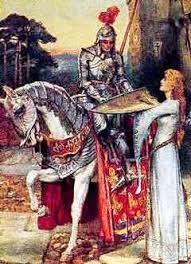 The story and the rarely told sequel:
Knight rescues Damsel, puts her in a castle, goes off to fight and rescue some more (it’s what knights do…)
Damsel gets bored and lonely in the castle, attempts to get into trouble so the Knight can come and rescue her some more (it’s what damsels do…)
Rinse and repeat until exhaustion or boredom sets in.

So what would the enlightened version of the story look like?
Carl Jung believed that dreams were an outlet for the psyche, a way it could pull all our pieces together to get to some form of reconciliation or wholeness.  He thought that on some level, all the characters in the dream were aspects of ourselves – that we are each of us the innocent victim, the conquering hero, the wicked witch.  In our waking lives we choose one part that our ego wants to identify with and then project the other parts onto willing adversaries.  (or as the Buddha described them ‘noble friends’).

So where do we go from here if we want to up the ante?  If the Knight represents our intellect we need to evolve our limited, narrow, repetitive thinking and move it up to the level of dynamic thinking.  Similarly our Damsel needs to evolve her inauthentic emotions into empowered emotions – that’s where all the energy for change will come from.
Focussed energy is like a fair wind to a sailor.  It moves static thoughts into creative inspiration and it stops emotions from drowning in a sea of negativity.

The new battleground:
Is in the centre.  It’s at the integration point of the left and right brain, the mind and the emotions.  That’s where the cavalry of intuition kicks in .  We are at a stage in evolution where we’ve gone as far as we can with the attributes of the left brain.  The intellect is great at rationalising and making plans based on information gathering.  By definition these strategies are all based on the past – the only place that data can come from.  This is then projected onto an imagined future.

But things are too fast now.  This is like turning up for a battle with swords, (a strategy based on all previous battles) only to find that overnight the other side has invented the machine gun.
Sometimes we can’t rely on the intellect.  As George Bush humiliatingly found out, our intelligence is flawed.

So if integration and intuition is the name of the game, how do we deal with our fear of the emotions?  We build a stronger vessel.  We stop worrying that we won’t be able to control them (we can’t) or that we won’t like some of them (we won’t).  We develop a spiritual backbone. (In evolutionary terms, it’s about time).  We rescue ourselves, then we rescue each other.
It’s hard work developing the authentic Knight.  But our soul won’t settle for anything less.  It just loves a good story.

Posted on January 25, 2009 by NickToye
Filed in General, one comment