Have you seen the High Street lately? Every window has had a makeover.

The confectionary shop is an explosion of heart shaped chocolates. The book store has replaced all the celebrity autobiographies with love poetry. The supermarket has an entire aisle dedicated to edible love tokens, pink champagne and recipes for romantic dinners. And don’t get me started on the card shops who must pray for the arrival of February. As soon as the Christmas stock is in the recycling bin, they’re off and running with Cupid’s bow and arrows.

In boutiques, the winter coats have been cast aside in favour of pink cashmere jumpers and red lingerie (grown up pink!) bearing the placard ‘Ideal Valentines gift’ – just in case you’d missed the hundred visual clues you’ve encountered so far. Sadly, this abundance of advertising serves more to disappoint women rather than inspire men. The requirement for romance, so prevalent in a woman’s DNA was probably in that extra rib conveniently removed from Adam at the beginning of time. Just as the shadow side of Christmas is associated with weight gain and family rows, the shadow side of Valentine’s day is often represented by anxious men and disenchanted women.

How did we get to this crazy state of affairs?

We need to go back to the drawing board and redefine love.

Do we want the personality of love or the soul of love?

Just as creativity takes intense discipline; love requires huge amounts of determination. Neither of these are popular concepts because we’ve become such an indulgent species.

We like creativity that arrives fully formed inside our head (thank you God) and manifests easily in the outside world (God who? This is all my own work).

We like love that’s fun and playful but we quit as soon as we have to put some effort in (“the magic’s gone”.) We truly are like little children… except we aren’t entering the Kingdom of Heaven any time soon.

Love is a very small word for a great, big, huge deal, but it has become an abused, misunderstood word.  And because we struggle so much to interpret and express it, we have abdicated this responsibility to the evil twins of capitalism and consumerism). That’s what happens when we lose touch with our creativity.

When we fall in love, it’s a lucky accident – a premonition of what it’s like to live hand in hand with our creative spirit. We feel expansive. This expansion allows more life in, which in turn stimulates our creative spirit. The outcome? Love songs, poetry, art and great sex.

However this expansion also wakes up the inner dragon of our neediness.  The outcome? Jealousy, fear, self-doubt and demands. This usually leads to an outpouring of chianti not creativity.

Our current method of dealing with this love-hate relationship with love is to distance ourselves. We go from “If you don’t love me I’ll die” to “I don’t need anybody”. We become super independent. We ridicule Valentine’s Day. After all cynicism is the only intelligent stance right? It’s just one big merchandising opportunity for those stupid enough to get sucked in.

And yet there’s a sadness in this cynicism. Particularly for girls, who hate the tawdry commerciality but long for something else – something that’s hard to put into words. A higher vision of love, romance and sexuality. A feeling of connection. A sacred ritual.

It wasn’t always this way.

Three thousand years ago, initiates of the Greek, Egyptian and Indian Mystery Schools studied the interweaving of sexual and divine love. Far from pushing sex underground (the mad decision made by our religious educators) they received extensive training in raising sexual energy to a higher level where it interfaced with the divine. This energy was far removed from the hormone induced lust we associate with sex today.

The union of a man and woman at this level produced an ecstatic spiritual experience (ex statis = out of body). This was a cosmic, transcendent event, not a fumble in the dark. But the ancients also knew the power of love, which is why some of them created Religion to control it. Political and spiritual leaders destroyed or buried the teachings of the hieros-gamos (sacred sexual union). They outlawed the Mystery Schools (Universities of the Soul) and created Universities of the Intellect. They built Seminaries (for the upper classes) and Churches (for the lower ones). They separated sex from spirituality, making sex shameful (unless used for the creation of more Christians haha!). They turned Jesus into a celibate God. And worse still…

They changed the definition of love.

And now thousands of years later we have…

Because without infusion by the transcendent, love is just neediness.

So to honour Socrates, let’s ask a question. What do we really want on Valentine’s Day? Gifts, cards and dinners create a temporary distraction from our scary inner space of loneliness. We think these tokens will provide us with the proof that we’re loved. But if we’re trying to prove something, it means we don’t really believe it. We’re just filling the inner space with extravagant gestures and meaningless rituals (every restaurant in London has already been pre-booked).

What we really want is to be known.

The Indians originally didn’t have a word for ‘love’ instead of saying “I love you” they said “I know you”. In other words I know the deepest part of you… and I’m still here.

Deep inside we are very flawed human beings, just pretending that we’re doing ok. When someone else can love us at that level, we are finally able to accept ourselves and find peace. We can remove the mask – that’s just the personality of love – and we can open our hearts.

Ah the bliss! No scratchy underwear. No cuddly toys. No mawkish violins. Just two people, surrounded by candlelight and a killer soundtrack, fully prepared to inhabit and explore their inner space. Presence is always the best present. In fact it’s the only present worth having.

So this Valentines day, turn away from the evil force of consumerism. Refuse to buy into the snake oil salesmen. Make a stand for creativity. Write them a poem, bake them a cake, make them laugh. And if you haven’t yet flexed your creative muscles, take a cue from one of the masters in our midst – Katy Brennan’s take on the whole day will definitely be the most inspired, funny entertaining thing on any London stage this 14th February. 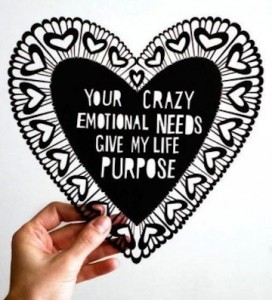 It’s a love that could change the world.

We need to boycott the banal, turn off the Rhapsody in Red, step away from the helium hearts…

and have the courage to open our own.

Posted on February 4, 2014 by Eleanor O'Rourke
Filed in Creativity, 2 comments