Creativity is the Rhythm of Life

Rhythm requires an understanding of beat. A pulse and a pace that in some way speaks to our heart and soul.

Q: Why does the world need creativity now more than ever?

Because we need to counter the effects of corporations who, by constantly beating the drum of “more stuff,” have us hypnotized into a dopey consumer trance.

Because we feel powerless when confronted with broken systems that seem to lack any evidence of creativity and common sense.

We can’t blame the media. They’re just making a buck by providing titillation for the boredom and adding fuel to the flames of anger.

And so it goes… A vicious and self-propelling circle of life.

Somewhere, deep in our body we know we are dancing to the wrong tune.

Creativity is an interesting word.

Hijacked by an industry named after it, creativity has a bad reputation.  People used to think it was synonymous with advertising  – that it was exclusive, fluffy and expensive.  Advertising became the benchmark of what people thought creativity was all about. But that’s a one dimensional aspect of creativity – the kind that exists to sell things.

During the last hundred years, our thinking has been very left brain. We valued profit. We valued growth because that led to profit, and we valued maths, so that we could calculate the profit. We were all about the numbers. 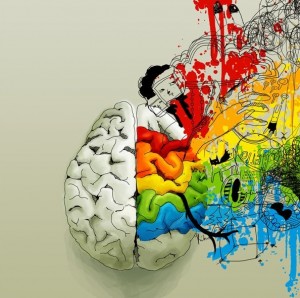 Creativity, being intangible, cannot be measured so easily. Sure we can put a price on a Van Gogh painting, because that’s a “thing”. But we certainly don’t know how to calculate the difference between a creative plumber and a non creative one… until after the job has gone disastrously wrong. Most spreadsheets don’t have a button that calculates attitude or ingenuity.

Our systems seek money not value. We forced creativity out of the system by simply not rewarding it. Because of our narrow obsession with numbers, we rewarded people who could make a profit and we cut off everything that had no financial value. Schools ditched creativity in favor of academic grades. (Note, grades include numbers so are deemed to be a good thing).

Similarly businesses rewarded the value chain by cost metrics alone, and cut off anything of intangible value.  We can’t put a number on something like design or cleverness, we can only see it at the end of the job. This means that in most businesses these subtle things don’t get valued.

We are now paying the price for this crazy choice. We can’t solve our complex problems like terrorism, epidemics and poverty. Our only answer to these problems is to throw massive amounts of money at them. It’s not working.

Money has lost its potency.

Our new currency will be creativity.

A Change Of Tune?

We instinctively know that something is missing. We are switching off the car crash TV and questioning the value of accumulating “stuff”.

We want more meaningful experiences, not spin doctored ones.

We can sense a rhythm. The pendulum is swinging back to the creative.

The rhythm of life is a powerful beat.

Here’s to the crazy ones. The misfits. The rebels. The troublemakers.
The round pegs in the square holes. The ones who see things differently. They’re not fond of rules. And they have no respect for the status quo. You can quote them, disagree with them, glorify or vilify them. About the only thing you can’t do is ignore them. Because they change things. They push the human race forward. And while some may see them as the crazy ones, we see genius. Because the people who are crazy enough to think they can change the world, are the ones who do.”

Admit it. You aren’t like them. You’re not even close. You may occasionally dress yourself up as one of them, watch the same mindless television shows as they do, maybe even eat the same fast food sometimes. But it seems that the more you try to fit in, the more you feel like an outsider, watching the “normal people” as they go about their automatic existences.

For every time you say club passwords like “Have a nice day” and “Weather’s awful today, eh?” you yearn inside to say forbidden things like “Tell me something that makes you cry” or “What do you think deja vu is for?”. Face it, you even want to talk to that girl in the elevator. But what if that girl in the elevator (and the balding man who walks past your cubicle at work) are thinking the same thing? Who knows what you might learn from taking a chance on conversation with a stranger? Everyone carries a piece of the puzzle. Nobody comes into your life by mere coincidence. Trust your instincts. Do the unexpected. Find the others…